Located between Camden and Islington, Kings Cross is one of the busiest and most vibrant areas of London. However despite this fact, booking a cheap hotel in the area is relatively easy and there are many to choose from, including Travelodge on Grays Inn Road, located near the area’s busy train station.

Kings Cross is one of the most important areas of London when it comes to transport. Immediately to the west of Kings Cross Station, and within striking distance, is St Pancras Station, the terminus for the Eurostar service to France and Belgium.

In former times Kings Cross suffered from the reputation of being a red light district and a slightly run-down one at that. But major regeneration since the 1990s has seen Kings Cross become a business, residential and retail area. 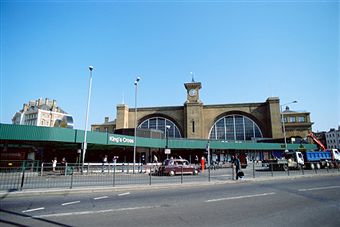 The British Library was installed next to St Pancras station and a glut of new restaurants and bars in the area has also had an impact on the feel of Kings Cross and its immediate environs, making it more of a destination in its own right rather than simply a transport hub.

For those with time to kill a visit to the London Canals Museum is worthwhile. It is housed in a nearby Victorian warehouse and gives an interesting overview of the history of London’s canal system. The museum is a short five minute walk from the Kings Cross Underground. Other attractions in the area include Camden Street Natural Park, St Pancras Old Church and the evocative Camden Town Hall.

And Kings Cross is in no way finished with its regeneration. To the north of the station lies the redevelopment project dubbed Kings Cross Central which will see millions of pounds worth of construction over the next two decades.