Savannah in Georgia is a place that is not only known for its natural beauty but is also well-known for its extensive history. This is the reason why Savannah has numerous buildings and structures that display architectural beauty. The closest airport for Savannah is the Hilton Head Island International Airport. When you are in the city of Savannah, you can get around the city by public transit, by car, on foot, by private bus tours and also by horse and carriage.

There are several places of interest in Savannah where you can spend quality time with your family. 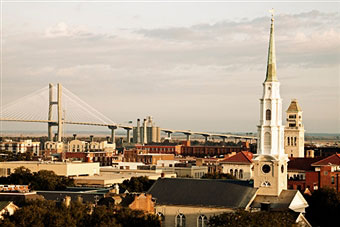 City Market is a point where you can find the best of entertainment, eating joints and shopping outlets in downtown Savannah. Pedestrians can enjoy live music as they along the courtyards of the City Market. There are carriage and trolley tours available to leave and reach the City Market easily.

The Lucas Theatre is the place where the well-known, Savannah College of Arts & Design holds many of its events. The Savannah Film Festival is also held here. Opera and orchestra performers from London, Italy and various places from Europe also come here to host their events.

The Telfair Museum of Art is a world-class arts museum that has vast gallery areas, educational resources, beautiful gardens and museum store.

There are several events held throughout the year at Savannah. The Savannah Film Festival can be witnessed in October and early November. Every year over 50 films from different genres like animation, documentary, short films, etc. are showcased during the film festival. The Savannah Music Festival, the Savannah Tour of Homes and Sidewalk Arts Festival are some of the notable events held at Savannah.

You will not fall short of public squares at Savannah. Originally, Savannah had only four public squares. However, by the 19th century, over 24 public squares were built. Some of the significant public squares to visit include Calhoun Square, Monterey Square, Chatham Square, Chippwea Square, Oglethorpe Square, Crawford Square, Greene Square, and Madison Square.

The Savannah Riverfront is a wonderful place to go out on afternoon or evening strolls. The riverfront is lined with numerous souvenir shops, eating joints that specialize in seafood items, and cafes. It is best to visit this place on foot instead of driving along the riverfront by car. Adults can come here at late hours to spend time at the bars located in the vicinity.