Well-known for horse racing and various fun-filled activities, Saratoga Springs is a cool place to spend your weekend. It is a pleasant town located in New York. The historical battle called the Revolution War took place 15 miles from this place. The closest airport to go to Saratoga Springs is the Albany International Airport.

On your weekend, you can come to Saratoga Springs to break free from your busy life. Here are some of the things you can do at this place. 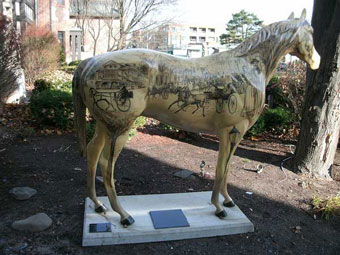 The best time to enjoy Saratoga is when the thoroughbred season is on during the months of July, August and September. There are several places where you can enjoy horse racing in Saratoga namely Saratoga Race Course, Saratoga Gaming and Raceway and Oklahoma Training Track. Some of the horse tracking tracks has indoor gambling and video gambling zones.

Whether you want to learn skating or skate around like a pro, Saratoga Springs Skatepark is the skateboard park which is situated in the middle of the East Side Recreation. Since the park was established by the municipality, it is a free service where you can skate to your heart’s content.

The spa park is a public resort where you can indulge in various kinds of activities such as refreshing mineral baths, play golf at eighteen and nine hole golf courses, play tennis and swim at swimming pools equipped with locker rooms and more.

There are numerous boutiques and shopping outlets in Saratoga. For people who love sporting fashion accessories and clothes, Lifestyles and Rockabella’s Boutique is a good place where you can get designer items from names like Eileen Fisher, Ed Hardy, David Kahn and Michael Stars. The open air market called Saratoga Farmers Market is a place where you can purchase homemade items, crafts and eatables.

Many chefs have migrated from New York to this place to offer you delicious foods. At Broadway, you can find many restaurants. Some of the places where you can choose to dine include Lillian’s Restaurant for amazing seafood, Compton’s for killing your breakfast hunger, Mare Ristorant for enjoying Italian food, Mexican Connection for savoring on mouthwatering Mexican food and more.