Niagara Falls can always be depended upon for a good time. Niagara is birthplace to Native American legends and the site of numerous daredevil stunts. They lie at the border between Canada and New York State in America. Millions of tourists visit yearly to witness the power of the falls, shop, dine, play, be entertained, try their luck at the casino, or just relax.

The area’s natural beauty has been well preserved and is easily accessible. People gaze in awe at the sights and sounds as 168,000 cubic meters of water plunges over Niagara Falls every minute and into the river about 180 feet below. Niagara Falls offers some breathtaking views as well as numerous attractions for visitors of all ages. 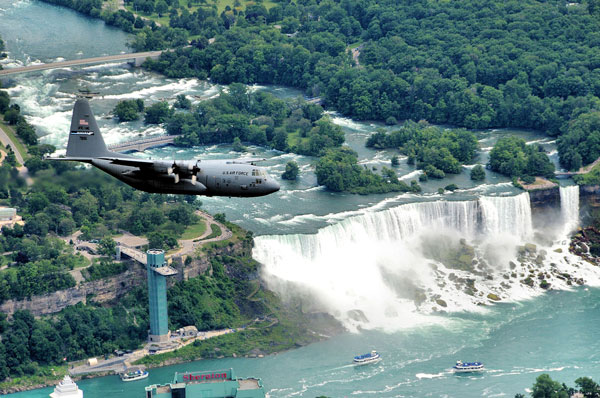 Here are some of the most popular sightseeing places of Niagara Falls.

1.  Journey Behind the Falls

Journey Behind the Falls, which is open year round, offers spectacular views of the thundering Horseshoe Falls from an observation deck below and from a network of tunnels located behind the falls. You can also walk beside the river from the Rainbow Bridge. The Table Rock Scenic Tunnels begin near Table Rock House, which is close to the lip of the Horseshoe Falls.

This attraction operates between early May and late October. It’s located about two miles from the Falls and gives a fantastic view of the swirling Whirlpool Rapids as they rage into the Niagara Whirlpool. A 350-yard long boardwalk allows you to walk alongside the exciting river. As you look up, you can see the gorge walls carved out of rock.

Many people don’t know it, but Niagara Falls was actually located about 6.5 miles downstream over 12,000 years ago and the rock has since eroded away to its present position.

This amazing trip runs between mid-March and the end of November. It provides a spectacular view of the fabulous whirlpool from high above. At this spot, the whirlpool is formed at the end of the rapids and different shades of green can be seen as the water travels the narrowest spot in the gorge. While riding the aero car across the water hundreds of feet below you get excellent views of the rapids, whirlpool, gorge, and enormous hydro-electric plants.

This famous boat ride has been operating since 1846, making it one of the oldest tourist attractions in North America. The boat travels to the base of the rocky American Falls and then sways its way through the basin of the Horseshoe Falls. The half hour cruise gives you a chance to view the Falls as they appear to be flowing down on top of you. Voyages are available on both sides of the border between the spring and late October.

Niagara Falls is also just as popular away from the water as the town has many attractions. Clifton Hill is a focal point of activity as it hosts several museums, including Ripley’s Believe It Or Not, Movieland Wax Museum, and Louis Tussaud’s Wax Works. The street is also home to numerous gift shops, restaurants, hotels, and bars.

Marineland is easily one of the most popular family attractions in Niagara Falls. It offers a wide variety of marine shows which feature animals such as killer whales, sea lions, dolphins, and walruses. It also has beluga whales and an Arctic Cove area. You’ll also find a host of amusement rides as well as wildlife displays and a fascinating aquarium that’s filled with numerous types of marine life. It’s also an educational attraction for youngsters.

This unique attraction enables you to walk alongside the gorge below. You’ll feel the spray of the water as it madly rushes past you just a few feet away. The Niagara River forces its way through a narrow mile-long gorge after it’s flowed over the falls and this is where you’ll take the walk. You’ll find the attraction close to the historic Whirlpool Bridge.

8. Niagara on the Lake

This charming, picturesque town sits on the shores of Lake Ontario and is just a few miles down the parkway from the Falls. It was Upper Canada’s first capital city and was destroyed by American troops in the War of 1812. It’s filled with 19th century houses, lovely gardens, a clock tower, boutiques, cafes, and hotels. It’s also famous for its theaters which host the annual George Bernard Shaw Festival.

The Skylon Tower is 520 feet tall and provides a superb 360-degree view of the Falls and surrounding area. You’ll be able to see all of the popular attractions from the top of the tower and it’s an ideal place to stop for a meal while enjoying the view. This is because the tower has two separate revolving restaurants at the top.

This fabulous Butterfly Conservatory contains about 2,000 free-flying butterflies. The site is enclosed in glass and also features over 40 species of tropical fauna as well as some small waterfalls. It’s quite an educational site as well as an entertaining one for people of all ages.