New Orleans is easily one of America’s most popular and recognizable cities. It’s home to some world-class festivals such as Jazz Fest and Mardi Gras and boasts the historic French Quarter and the endless party that’s known as Bourbon Street. You’ll find numerous music clubs here along with planet of museums and natural wonders. And of course, the famous Cajun food is a spicy delight.

All of the attractions are easy to access and there’s never a dull moment in this vibrant city. No matter whether you’re there for the music, food, or history, you will find more than enough to see and do.

Here are 10 of the most popular sightseeing places in New Orleans. 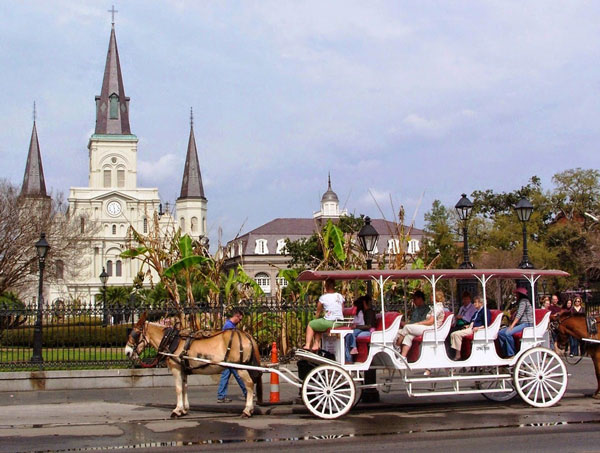 The French Quarter of the town, which was established back in 1718, is the city’s most well known neighbourhood. It’s only a small area of seven by 13 blocks in size. It’s a very pedestrian-friendly region which is bursting with tourist attractions, live music spots, and shops. It’ll likely take a couple of days so see it all on foot. Bourbon Street is probably the most famous location here.

If you hop on the St. Charles Streetcar in the historic French Quarter you can take it to the beautiful Garden District. This area is filled with a wide variety of fantastic plantation-style homes that were built by the city’s wealthiest residents after the Louisianan Purchase.

The Audubon Nature Institute is home to three separate family-oriented New Orleans attractions. The Louisiana Swamp can be found in the zoo and it’s home to some rare white alligators. You’ll also find an aquarium, where you can view an IMAX film called Hurricane on the Bayou that tells the visitors the tragic story of Hurricane Katrina through the eyes of a 13-year-old. The institute also features an insect-arium. This is where the brave tourists can sample an assortment of cooked insects.

This popular museum was originally called the D-Day Museum when it opened its doors back in 2000. It’s now known as the National World War II Museum and offers over 70,000 square feet of exhibit space. There are numerous interactive displays that take you through different aspects of the war. There’s also an informative 4-D film called ‘Beyond All Boundaries,’ which is narrated by actor Tom Hanks.

New Orleans City Park is about 1,300 acres in size, making it just about double that of Central Park in New York City. It sands on a former plantation and is overflowing with wonderful green space and waterways.

It houses several interesting attractions such as the New Orleans Museum of Art and Sculpture Garden, the Storyland Playground, the New Orleans Botanical Garden, and the Carousel Gardens Amusement Park. It also features the NOLA Gondola, which is a Venetian-style gondola ride that takes visitors through scenic the park. When Christmas comes, you’ll find the park hosts a huge, colourful light display.

This famous French-Quarter cemetery was established back in 1789 and is now on the National Register of Historic Places. This is where Queen Marie Laveau, local politicians, and Civil and Revolutionary War Soldiers are buried. It features elaborate tombs that are set above ground. It’s believed that the small cemetery is haunted by those who were laid to rest there.

The Café Du Monde is famous for its chicory coffee and beignets and is open for your pleasure 24 hours a day except on Christmas. The café opened up in 1862 and is one of New Orleans’ most-visited sites even though it serves coffee, soft drinks, and beignets only.

The city of New Orleans is probably most famous for its annual Mardi Gras festival which attracts thousands of visitors from all over the world. Mardi Gras is the city’s busiest time with its colourful street parades and live music. If you’d like to see where the parade floats are made and learn more about this fabulous festival then the best place to visit any time of the year is Mardi Gras World.

The Steamboat Natchez takes passengers down the historic Mississippi River for some excellent sightseeing opportunities and tasty jazz dinners. It’s one of just two authentic steamships that still sail down the mighty Mississippi. The Natchez also provides free concerts on shore before setting sail.

New Orleans was a favourite haunt of prostitutes and pirates many years ago and the city has a reputation of being haunted. You’ll easily find nightly ghost tours when visiting, with most of them concentrating on the French Quarter. These trips tell the colourful and creepy history of the city.