There are many different reasons why about 20 million visitors flock to Mexico each and every year. It’s famous for numerous things such as its food, tequila, music, culture, history, beaches, sparkling blue ocean waters, and world-class resorts. It’s also the site of many ancient Mayan and Aztec civilizations, which are among the world’s most historically preserved.

Mexico offers both the Pacific Ocean and Caribbean Sea to visitors and they surely take advantage of these warm bodies of water by visiting the waterfront resorts in record numbers. Mexico also provides many camping and hiking opportunities for the adventurous, due to the nation’s spectacular natural beauty and landscapes.

There’s something for everyone here. These are some of the most popular sightseeing places of Mexico: 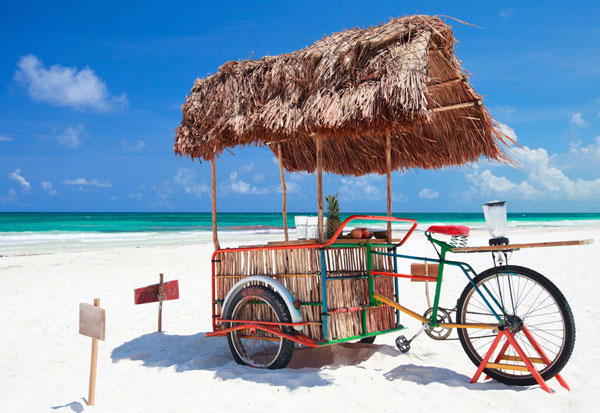 Palenque is a well-known archaeological site that belonged to a former Mayan Empire located in what is now the western region of Chiapas. This Mayan city is home to some of the most unique sculptures and architecture that were ever produced by the Mayans. Most of the structures in Palenque were built between the seventh and ninth centuries. One of the most popular of these is the Temple of Inscriptions. This is a Mesoamerican pyramid that was built as a funerary monument.

Copper Canyon is actually a network or series of various-sized canyons that are larger than America’s Grand Canyon when joined together. One of the most popular ways to view it is to take a trip on the Chihuahua al Pacifico Railway. This amazing trip takes you through more than 80 tunnels and over three dozen bridges and then climbs as high as 7,900 feet above sea level, allowing for some fantastic views of the Copper Canyon network below.

This destination lies on the eastern coast of the beautiful Yucatán Peninsula. It was once a major port of Coba, which was a busy Mayan city. It’s believed that Tulum was built in the 13th century when the ancient Mayan civilization started to decline. The background setting of a tropical beach makes it quite a popular Mexican attraction.

The famousChichen Itza is known as the biggest ancient Mayan city on Mexico’s Yucatan Peninsula and is easily one of the country’s most-popular tourist attractions. El Castillo, which is a temple-pyramid is one of the site’s most famous landmarks.

The temple is said to be significant astronomically as there are a total of 365 steps in the pyramid, which represents the 365 days in the calendar year. There are 91-step stairways on each side of the structure with one more step at the top of the building.

Another popular site at Chichen Itza is known as El Caracol, which is a circular-shaped temple that was used as an ancient astronomical observatory.

This is an ancient metropolis which was built during the second century BC. It features several huge pyramids, with the second-century AD Pyramid of the Sun being the biggest in Teotihuacan and the country. There’s a smaller pyramid known as Pyramid of the Moon, which was completed in the middle of the fifth century. The Aztecs used and honoured the pyramids as a pilgrimage site about 700 years after the Teotihuacan empire had vanished.

There are dozens of fantastic beach and resort towns in Mexico, but Acapulco was one of the original. It began to become a popular getaway for the rich and famous in the 1950s and was made famous in the Elvis Presley movie ‘Fun in Acapulco.’ It’s still a popular spot with American college students and many Mexicans take their vacations here. One of the most popular activities here is cliff diving, which began in the 1930s.

This charming colonial city lies in the Sierra de Guanajuato Mountains. It was founded back in 1554 and was located close to one of Mexico’s most successful silver-mining regions. The city was very prosperous and it resulted in the construction of some excellent colonial buildings and haciendas. There are many colourful streets in the city and there’s a series of underground tunnels for traffic, making it an ideal destination to explore by foot.

Cozumel is known as one of the world’s greatest destinations for snorkeling and scuba diving. It’s just off of the spectacular Yucatan Peninsula. The crystal-clear waters around the area were discovered first in 1959 by Jacques Cousteau, when he called the location one of the best he’d seen. Cozumel is now known as a National Marine Park as the government sees this as the best way to protect the assortment of tropical fish and wonderful reefs that can be found there.

The city of Oaxaca hosts one of Mexico’s most popular festivals, which is known as Dia de Los Muertos (day of the dead). It’s a Latin American event which was started by the Aztec and Zapotec indigenous cultures many centuries ago. The event begins in late October when Mexican families decorates their loved ones tombs as they believe their spirits will return. Home altars and graves are colourfully decorated in flowers and other ornaments for the annual festival.

This beautiful cathedral is the oldest and biggest in the North American continent as well as South and Central America. It’s located close to the sacred Templo Mayor, which lies in the ancient Aztec capital city of Tenochtitlan. It’s beautifully decorated and an amazing sight to behold.