The Golden State, also known as California, sits alongside the warm waters of the Pacific Ocean on America’s west coast. It’s home to some of the nation’s most famous cities, such as Loa Angeles, San Diego, San Francisco, Sacramento, and Monterey.

It’s an ideal location for outdoor activities due to the diverse landscapes such as the ocean, valleys, and mountains. You can head out into the countryside to enjoy camping, hiking, fishing, skiing, boating, swimming, windsurfing, and mountain biking, and then head a few miles down the road and enjoy the hustle and bustle of its wonderful cosmopolitan cities.

There are boatloads of attractions to enjoy here. Here are 10 of the most popular sightseeing places of sunny California. 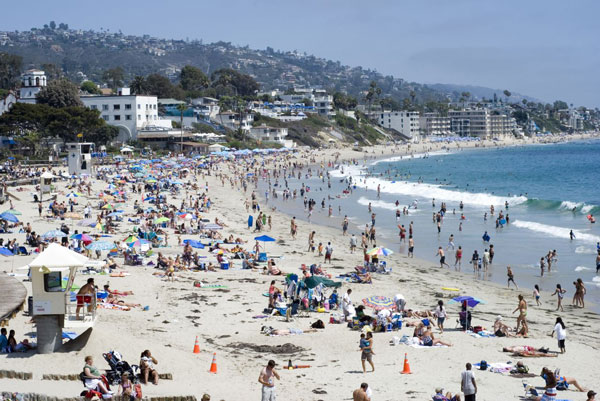 Hollywood and its famous sign in the hills are always popular with visitors to California. This section of Los Angeles is known as film and television capital of the world. Numerous Hollywood theaters are still used as concert stages and venues when it comes to debuting major motion pictures and the annual Academy Awards are hosted there. It’s also the home of the Hollywood Walk of Fame and is a popular spot for tourism and nightlife.

At a length of 8,900 feet, the Golden Gate Bridge is one of the most-recognizable structures on the planet. It was opened in 1937 and crosses over San Francisco Bay. When it first opened it was the world’s biggest suspension bridge. This magnificent California icon is considered to be one of the 20th century’s most amazing engineering feats.

The Monterey Bay Aquarium is generally considered to be the best in America for people of all ages. It’s home to a million-gallon tank which features a variety of sea turtles, sharks, and fish as well as a three-storey high living forest and a sea-otter exhibit. There’s a splash zone for kids and you’ll also be able to get a close-up look at seahorses, penguins, moray eels, sea dragons, moray eels, and tropical fish. There are live presentations and feeding shows as well.

San Diego’s Sea World is a fun and educational site for those who want to learn about the world’s marine life including sharks and dolphins. It’s located on a 22-lot of land on the shore of beautiful Mission Bay. The most popular attraction here is easily Shamu, the killer whale. You’ll also be able to dine inside of a shipwrecked schooner and take numerous tours that teach visitors about the animals and how they’re cared for. Activities such as rock-wall climbing are available along with several water rides.

This amazing national park is 1,189 square miles in size and stretched over the western peaks of the Sierra Nevada Mountains. It attracts about 3.5 million visitors each year. This World Heritage Site is famous for its stupendous waterfalls, granite cliffs, crystal-clear streams, huge Sequoia groves, and fantastic variety of wildlife and plants. It’s a fantastic location for hiking, camping, fishing, picnicking and nature watching.

The world-famous Disneyland Resort has been entertaining people of all ages for many decades. The wonderful theme park is based on popular Walt Disney characters and opened its doors in 1955. It features all sorts of rides, shows, entertainment, and activities. It’s fun for people of all ages and attracts millions of visitors each year.

This spectacular castle lies on a 250,000-acre ranch and belonged to the family of William Randolph Hearst, one of America’s most famous newspaper magnates. It sits on a hill near San Simeon, which is about halfway between San Francisco and Los Angeles and overlooks the beautiful blue Pacific Ocean. In 1957 it was donated to the state of California. These days it’s a National Historic Landmark and a State Historical Monument. It’s filled with art antiques, gardens, pools, an airfield, movie theatre, and tennis courts among other things.

This stunning forest sits in Northern California’s wine country. It’s quite an alluring place. You’ll be able to walk through the amazing petrified redwood trees and learn how this forest was created by volcanic activity more than three million years earlier.

Alcatraz is one of the most famous prisons on the globe. It sits out in San Francisco Bay and used to house some of America’s most notorious criminals up until 1963. It’s believed that nobody ever escaped the prison alive, even though quite a few convicts tried. You can visit this former high-security prison and National Historic Landmark by taking a ferry to the island and exploring the dingy cell blocks.

This world-acclaimed zoo is located in San Diego’s Balboa Park and houses more than 4,000 animals as well as 6,500 different types of exotic plants. There are numerous sections to the zoo and there’s also a children’s zoo where youngsters can feed the animals and educate themselves about them. The zoo opened in 1916 and is the home to a Giant Panda.