Having pre-booked a place on the EuroTunnel and spent some time comparing cheap hire cars online, we were all set for a weekend trip to continental Europe. The question was where to go. Paris seemed a little too obvious; Amsterdam a tad too far. I came to the decision, therefore, that it was high time I revisited Brussels, which I had come to love during a previous trip for its unique mix of elegance and eccentricity, the refined and the experimental.

There was another factor influencing my choice, however: the release of ‘The Adventures of Tintin: The Secret of the Unicorn’, directed by Steven Spielberg. I first travelled to Brussels by Eurostar and was greeted, much to my joy, at Bruxelles Midi station by a mesmerising black-and-white still of Tintin latched on to a locomotive. It didn’t take long to realise that Tintin was everywhere: cafès, bars and restaurants are adorned with memorabilia; his child-like face peers out of store fronts; comic book shops hold copies in their thousands. Then there’s the Hergè Museum, which has a vast selection of original plates, documents and photographs on exhibit – a day-long activity for the Tintin fanatic. 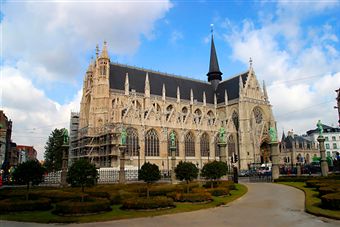 In fact, Belgium has been home to its fair share of artists. Whilst Georges Rèmi was here, writing under the pen-name Hèrge and frequenting Brussels’ fine selection of ‘brown cafès’ by night, the surrealist painter Renè Magritte was out-and-about altering the way we perceive ourselves, the world and reality in general – an admirable feat, to say the least. Like Hergè, Magritte’s legacy is on display at the five-floor Magritte Museum located in a grand building of the neo-classical style. As well as boasting over two-hundred of Magritte’s paintings, sculptures and drawings, there are personal correspondences, photographs and screens rolling video footage of the artist relaxing with a glass of wine, or fooling around at parties with his friends and family.

I visited the Hergè Museum one day, the Magritte Museum the next. Both evenings I wandered the streets in search of a place to dine and indulge in unhealthy quantities of Belgium’s world-renowned beers. On neither occasion did I have to look far. I spent one night in a corner table at La Mort Subite, feeling positively calm as I sipped my ‘Sudden Death’ (one of their house specialities) and watched each passersby strolling in the rain. The next night I visited an establishment known as the Bison Bar. A pianist was playing the blues, the bartender was eager to recommend and offer tastings of his favourite beers, and a bison head stared down from above – all complimentary to a surrealist day.

Travelling to the Belgian capital by car is easy, fast and affordable. The EuroTunnel is also a great, eco-friendly alternative to car ferries. We drove to Folkestone, boarded our shuttle and looked forward to our adventure. I couldn’t wait to return to Brussels. I fancied myself as a Tintin-esque adventurer; I left my two travel-companions to decide who took the part of Snowy and who Captain Haddock.